When God Says No

Now listen, you who say, “Today or tomorrow we will go to this or that city, spend a year there, carry on business and make money.” Why, you do not even know what will happen tomorrow. What is your life? You are a mist that appears for a little while and then vanishes. Instead, you ought to say, “If it is the Lord’s will, we will live and do this or that.” James 4:13-15

Let’s face it. Many of us don’t react any better than our children when we’re told no. Sure, we don’t openly throw tantrums or show defiance, but when life doesn’t unfold as we envision, resentment surges in our minds and hearts.

We tell our kids no because it’s in their best interest. God tells us no for the same reason. Because we can’t see the big picture or the future, we often grumble to ourselves that our prayer was worth answering in the affirmative. Or we’re just so disappointed that we can’t fathom why we were told no.

For the past dozen years, since I first became aware of South Sudan’s troubles from decades of war and genocide waged against it from the North. I’ve prayed God would provide a path for me to travel there as part of a mission team. As I learned more and followed the country’s path to independence in 2011, my hope grew that God would indeed finally open the door for me to go. I researched mission groups, and God placed people in my life who’d done mission work there or had plans to go. The one piece of advice every overseas mission worker gave me was, “Find a reputable group with a solid mission plan for going into South Sudan.” 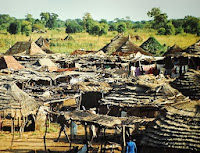 South Sudan isn’t a country you go into on a whim or with poor planning. Little to no infrastructure exists in the country. Bridges and paved roads are almost non-existent outside the capital, and the terrain is rugged in places and laced with rivers, one of which is the Nile. Personal safety cannot be guaranteed on any level. Basic needs such as water are often scarce, and forget about plumbing or electricity. Their humanitarian needs are so great, but as important, their spiritual needs amidst abundant witchcraft.

In all my research, I kept returning to the website of a particular group: Make Way Partners

When MWP founder Kimberly Smith arrived in South Sudan more than ten years ago, she discovered orphans sleeping in trees or in the bush to escape wild animals and those who would kidnap them for military or trafficking purposes. She succeeded in building three orphanages with medical clinics within the country, which was difficult because supplies had to be trucked from neighboring countries over 2,000 miles of rough terrain with bandits attacking them regularly. In addition to her travels back and forth with a core group of mission workers, she takes an outside group each year. The next scheduled trip was February 2014. Three weeks in two locations within South Sudan, and everything I needed to exist I would carry in—a tent, sleeping bag, food, clothing, water filters, etc.

Elated when I read the lengthy description about the trip, I e-mailed back and forth with Kimberly’s assistant to answer some questions and then printed the eight-page application. Through the summer, I prayed about going. The application deadline was September 1, 2013. Often, I awoke in the middle of the night thinking about the trip. My only doubts were self-doubts. Would I be able to handle what I saw and experienced? Would I hold up under such extreme physical conditions? Would my presence make a difference? I never feared for my safety. (Perhaps that would’ve come later.)

As a side note, anyone contemplating foreign missions should ask themselves similar questions. Although Satan will seize every opportunity to needle your mind, honest self-scrutiny is important. I turned my fears over to God, knowing through intense spiritual and physical preparation, if it were His will that I went, He would equip me.

As it neared the application deadline, I wrestled even more with the decision, often awakening during the night and praying for direction. Finally, the answer came.

To say I was disappointed is an understatement. Part of me felt like a failure. I’d prayed diligently, done my research, had begun physical conditioning, and for what? I knew God’s answer was final, and my faith told me it was for the best, but I didn’t have peace in my soul. I began to pray for that peace!

A few days before the application deadline, I actually slept through the night and awoke with peace. I wasn’t going to South Sudan, and it was okay. This was God’s will.

I climbed from bed, went to the kitchen, and poured myself a cup of coffee. After booting up my computer, I clicked on my email. Among the dozens of messages was one from Make Way Partners. For the first time in ten years, Kimberly had decided not to take a group to South Sudan. Her core group of workers and she would make the trip as they did several times a year, but they would not train or take newcomers. She said she didn’t understand God’s direction, but she had to follow it. It caused a small ruckus within MWP with some staff not agreeing or understanding how she could make such an abrupt decision with no reason. Hmmmm. No reason? God’s direction does not have to include reasons. (click to tweet) J

War now wages in South Sudan. More than a thousand South Sudanese have been killed. An estimated 180,000 have been injured or displaced. The cause of the war appears to be an attempt by the former Vice President to overthrow the government. He controls a faction of the military. As happens in many countries with multiple ethnic and tribal sects, the fighting has developed into sectarian violence. While other missionaries have been forced to abandon their projects, MWP’s indigenous staff ensures the orphans are cared for year round without the physical presence of Americans. Even so, the indigenous workers face ongoing threats.

Never second-guess a “no” answer to a prayer. God knows what’s best, despite how Christ-honoring you perceive the request to be. If you hear nothing else I say, hear this: Obedience is more important than anything else you can offer God. While He doesn’t need you specifically to accomplish His will in any given area, our obedience in seeking His will ensures a place inside that will. We must obey God in both the “no” and “yes” answers. Trust Him to get it right.

If it is God’s will that I ever go to South Sudan to participate in the Great Commission and to deliver humanitarian and medical aid to the most impoverished and human trafficked nation in the world, He will provide a way. Meanwhile, there’s much to do on other fronts to win souls to Christ, provide humanitarian assistance to the hurting, and encourage Christians in their daily walk.

I implore you to join me in prayer for the “least of these” in South Sudan, already displaced by decades of war. The missionaries in the trenches are pleading for prayer support. Though we’ll possibly never know why war wages in some countries more than others, as long as we live in this fallen world where evil abounds, we’ll have war. We must continue to pray for the protection of the innocent.

If you would like to share your own mission story or “no” answer, please do so. I’m sure my other readers would be blessed. Share your prayer requests, as well, or if have a confidential request, please e-mail me. I’d love to pray for you.

For those of you seeking a tangible, hands-on way to help the displaced in South Sudan, most of whom are widows and children, MWP offers a chance to provide a "can of life" for those coming to their orphanages seeking help. Click here to learn more.
Posted by Laura Hodges Poole at 10:38 AM