Eternal Hope In The Midst of Darkness

If the Lord had not been on our side when people attacked us, they would have swallowed us alive when their anger flared against us. Psalm 124:2-3


I still get chills watching the film footage of planes slamming into the World Trade Center on 09/11/01, the buildings falling, and people screaming and running. I’m immediately transported back to that day and how life unfolded in the aftermath. When would the next attack happen? Would we ever feel safe again?


As many Americans did, I clung to my faith. No matter what, God was with us. Tragic things happen in this world, yet we foolishly believed they didn’t happen here—at least not on that large of a scale.

On 9/11, and in the days and weeks to follow, political party lines were erased. President Bush reassured us from the top of the Twin Towers rubble with a bullhorn in his hand and again, days later, when he bravely walked to the center of a major league baseball field and threw out the first pitch. Congress stood arm-in-arm on the steps of the Capitol and sang God Bless America. We were one people with one voice joined in determination to protect what America stood for—freedom.

But there was another angle to 9/11 for my family. My son Josh turned seven years old that day. We had serendipitously celebrated with a party the Saturday before. The naïve belief in our nation’s security that the party-goers and our family appreciated three days before the attacks was shattered, much like Pearl Harbor had done decades before. Though Josh has enjoyed birthdays since, they’ve never quite been the same.

My son’s generation has grown up in the shadow of the war on terror. Some of his earliest memories are of his country going to war—a war brought to our shores as it had been sixty years earlier. I had a difficult time making sense out of the attack and an even more difficult time explaining it to him.

Born out of this tragedy was renewed patriotism for many Americans, young and old alike. The scenes of firefighters running into towers that eventually collapsed on them had a profound effect on Josh, as it did for many of his generation. The firefighters’ sacrifice instilled in him a sense of duty toward his country and fellow man. Many like Josh were galvanized into action, even though at a young age of 7, he could only be angry that it happened.

When Josh turned 16, he joined our volunteer fire department’s teen explorer program and began taking the rigorous classes needed to be a firefighter. After two years of training and service, he proudly received his “black helmet” on his 18th birthday, signifying his full firefighter status. It was all he talked about for weeks before. After graduating high school, he went on to community college where he recently obtained an A.S. in Fire Science. The job market is tough with seventy percent of our nation’s firefighters being volunteers. If someone had told me in the midst of all that tragedy fourteen years ago that Josh would be a paid firefighter working on his 21st birthday, I couldn’t have wrapped my mind around it. Yet, he is. And I couldn’t be prouder knowing he serves the community today.


Americans changed in the years following the attack. We’re all battle weary from the evil perpetrated on us that clear September morning and the wars and terror since. We learned on 9/11 that the bubble of security we’d foolishly wrapped ourselves in did not exist. Every year seems to bring a new normal of what terror looks like and a renewed sense that we are impotent to protect ourselves from it.

But we also reaffirmed something Americans knew before the attacks. Americans pull together for the good of all. Americans overcome. As we pause to honor the victims of 9/11 today, let us do so with the spirit of hope their lives represented. It’s a thought that’s desperately needed in our current social and political climate when Americans now seem most interested in things that divide.

We must never give up hope.

You will be secure, because there is hope; you will look about you and take your rest in safety. Job 11:18 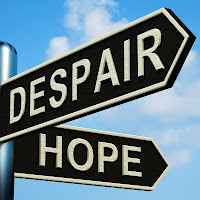 Even in his worst trial, Job had hope. We have a duty as Christians to reject despair, rejoice in the hope found in Christ Jesus, and go about the daily business of life—no matter what tragedies befall us.

Life truly is how you choose to frame it.

9/11 symbolizes America’s heartache and perseverance, but it’s also a symbol of one of the greatest days of my life—the day my son was born.

While we mourn with those who mourn, rejecting despair is imperative to the Christian life and witness. Good can arise from the worst circumstances. We only have to look to the 9/11 survivor stories to know this is true. It’s only through God, that during the dark times, we can experience the light of eternal hope (Romans 5:1-5).

Do you have a special Bible verse you turn to in adversity—maybe even during the 9/11 terrorist attacks or their aftermath? I’d love for you to share it. Leave a comment to inspire other readers and for a chance to win a kindle copy of my devotional, While I’m Waiting: Going from despair to hope while praising God and choosing contentment during trials.

If you need prayer, please share in the comments or email me confidential requests. I'd love to pray for you.

God bless you all,
Laura

When I was a little girl, my daddy seemed larger than life. In my eyes, he was perfect. He could do anything, fix anything, and included me in whatever he did, no matter how busy he was. Living on a small farm, I often trudged along behind him, down the garden rows, my little bare toes squishing in the sandy Florida dirt. I helped weed or dropped seedlings into holes he dug. Sometimes I chatted or sang while he worked.

The only thing I didn’t want to participate in?

I’d hide in the house, crying for our pets livestock that would go into the freezer and eventually end up on the dinner table. But I was smart enough to realize food raised meant less money had to be spent in the store. Hunger is the best spice, Laura Ingalls Wilder once said. It can also be characterized as a great memory eraser, so I didn’t cry for long. Death is a necessary part of living—a lesson I learned even more intimately as I lost human loved ones over the years. One that modern-day parents try to shield their kids from and then wonder why they have a “why me” mentality when loss occurs. 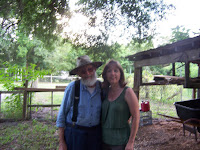 As I grew older, my dad’s flaws became more apparent to me, and as a teenager, I railed against learning anything from him. Now, at age 50, I’ve come full circle and am hard-pressed to find any man, besides Jesus, who is more perfect than my father.

Among the important things my father taught me is love. Yes, love is taught. Not just modeled or felt, but taught. This meant discipline and rebuke along with affection. My dad is the softest tough man I know. I liken him to a tree surgeon. He pruned and it hurt, but he applied gentle salve to my soul and coaxed my growth with his love.

It wasn’t long before another man, one even more supernatural than my father, appeared in my life. Not surprisingly, a man modeled through my father. And in those tumultuous teenage years, when I felt no one else would listen, Jesus did. He once said the meek shall inherit the earth.

Meek doesn’t mean weakness but rather controlled strength. Jesus loved and hung out with sinners but never condoned their sin. As recorded in the gospels, he often ended an encounter or healing with “go and sin no more.” He understood that the root of most people’s problems is sin. Not a politically correct statement to make anymore but one nonetheless true.

Love is patient and kind, but it also rejects evil and rejoices with the truth (1 Corinthians 13:4-6 NIV). This includes rebuking as Jesus and my father did. Love doesn’t mean excusing bad behavior or not setting boundaries with those unhealthy to be around—no matter how much you love them.

I came to realize rather quickly that these two men were the ones I could count on. Dad and I butt heads about some things, and he can be cantankerous at almost 80 years old, but his spiritual compass points squarely at our Savior and always has.

And Jesus? As the old hymn says, He walks with me and talks with me along life’s narrow way. He’s provided me comfort when I thought there wasn’t any. He’s given me strength and hope when I had none. He’s promised me a future. He forgives my sins. He calms my anxieties.

Not only through my daily spiritual walk but through His words:

“I am the way and the truth and the life. No one comes to the Father except through me." John 14:6

“I am the light of the world. Whoever follows me will never walk in darkness, but will have the light of life.” John 8:12

"Are not five sparrows sold for two pennies? Yet not one of them is forgotten by God. Indeed, the very hairs of your head are all numbered. Don’t be afraid; you are worth more than many sparrows." Luke 12:6-7

Who walks with you on life’s narrow way? If you’ve not met my friend Jesus, why not pick up the Bible and let Him introduce Himself in the gospels? I assure you, you won’t be disappointed. He’ll love you with a love that “protects, always trusts, always hopes, always perseveres” (1 Corinthians 13:7).

Do you need prayer today? I’d love to pray for you. Please leave a comment or email me confidential requests.

Today, Saturday, and Sunday (9/4-9/6/15) my devotional, While I'm Waiting, will be FREE for Kindle download on Amazon. This will take you on a journey to experience hope and contentment while waiting on an answer to prayer. Also, my most recent project, Path to Love, a Christian romance, is available for FREE from Amazon. Take a moment to download your copies!

“Bible and the Heavens” image courtesy of Gualberto107/FreeDigitalPhotos.net.
Posted by Laura Hodges Poole at 12:25 PM 4 comments: