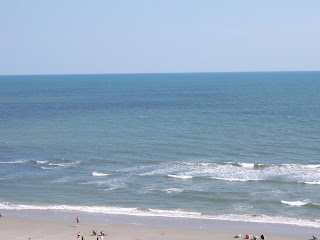 I've spent my weekend on the beach, soaking in the sun and surf, and having some much needed down time with my family. But the enjoyment goes beyond jumping waves with the kids and looking for shells. I'm reminded of God's greatness, mercy, and grace as I walk along the shore. Humbling might be an accurate word to describe the magnitude of my feelings.

I was overwhelmed standing on the edge of our continent facing the Atlantic Ocean. Think about it. We're suspended on a planet in the universe and the only thing keeping us here is a little thing called gravity.

So many things we take for granted--the air we breathe, waking up every morning, the ocean, yes, even gravity, that are here because one day God chose to give us this amazing gift called life.

What are you thankful for today? 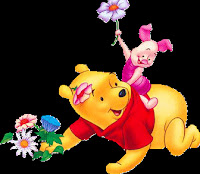 "You can't help respecting anybody who can spell TUESDAY, even if he doesn't spell it right; but spelling isn't everything. There are days when spelling Tuesday simply doesn't count.” --Winnie The Pooh

Life is too short to take very seriously. I spent an hour with a friend this afternoon after dropping off some work at the doctor's office I provide transcription service. After such a busy morning, it was a welcome reprieve. We had a nice chat and she gave me a boxed set of Little House books before I left her house.

With our busy lives of work, school, and family responsibilities, when's the last time you just sat and chatted with a friend?

Pooh's right. There are some days when certain formalities don't count. Some days are meant for diversions, friendly chats, and wandering off the trail for a bit.

How did you spend your Tuesday? 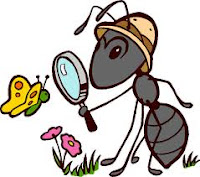 “Go to the ant, you sluggard; consider its ways and be wise! It has no commander, no overseer or ruler, yet it stores its provisions in summer and gathers its food at harvest. How long will you lie there, you sluggard? When will you get up from your sleep? A little sleep, a little slumber, a little folding of the hands to rest—and poverty will come on you like a bandit and scarcity like an armed man.” Proverbs 6:6-11
Posted by Laura Hodges Poole at 8:38 AM 3 comments:

I recently joined a group on Facebook: You gotta be from Newberry if…(Newberry, FL, that is). I’ve laughed at the memories other people have shared. Among the reminiscence of local hangouts and mischief were posts about school. Teachers kept paddles in their desks and used them. One compared my second grade teacher’s swing to Jose Canseco’s. LOL. One teacher had a reputation for shaking you until your teeth rattled, if you were bad.
A couple of teachers whacked with their hands, if they had a mind to. I only had to be whacked once. I was in first grade, leaning on my seat with one knee, the other foot resting on the floor. Bent over my work, I was intent on the lesson and started whistling. That’s when the whack came. I sat down, never to whistle and work at the same time again.
Newberry is a small, rural town in North Central Florida. It was even smaller back in the day. Our school was divided into two campuses, elementary and high school. At the end of sixth grade, you moved up to high school, which was kind of daunting.
We had three elementary school buildings, which had been built over the decades as Newberry’s population grew. Kindergarten and first grade were in a quadruplex. Grades two through four were in the green schoolhouse, a two-story imposing building. I got dizzy sometimes when I craned my little neck to look up at it. Fifth and sixth grades were in the oldest building, the red brick schoolhouse, which originally housed the entire elementary school. Last summer, I took Josh back to visit the red brick schoolhouse, now an historic site. The memories that visit brought back…
While we were blessed with furnace heating in winter, the school buildings didn’t have air conditioning. Instead, large windows were raised to allow in the hot, humid Florida air. Not necessarily cooler, at least the air was fresh, unlike the sweaty kids after they’d played on the playground at recess.
Along with the luxury of outside air came annoying gnats. I don’t know if they exist anymore, but we had gnat sticks. They were like oversized Chapsticks you rolled over your necks and cheeks to keep the gnats out of your face. It was a grimy, but effective, substance.
All of my school supplies fit neatly in a cigar box my father picked up for free at a gas station in town. Back then, at least in our community, we didn’t shop for school supplies. In elementary school, we had a lined tablet, a sharpened wooden pencil, and crayons. I can’t remember what else we filled the cigar box with—except our gnat stick. As we got older, some kids had pencil pouches. Funny how we managed compared to modern kids.
In fifth grade, we were blessed with the building of a modern schoolhouse. When it was finished, the whole elementary school grabbed their books and cigar boxes and marched down the street to the new air conditioned, carpeted schoolhouse. We were proud of our new school. The only downside was no windows in the classrooms. But we were cool and didn’t need the gnat sticks anymore—at least not inside.
Nothing like fond memories to make one realize contentment and materialism are worlds apart. Maybe that explains why we have a nation of discontented people.
Something to ponder.
Posted by Laura Hodges Poole at 8:28 AM 7 comments:

On the morning of September 11, 2001, I saw my children off to school before settling down in front of the television a little before 9:00 to eat breakfast. The news showed that a plane had slammed into the North Tower of the World Trade Center a few minutes earlier. I listened to the network anchors speculate on what had transpired.
To my surprise, another plane appeared on the TV screen. The next few seconds were surreal. Time seemed to slow down as many thoughts ran through my mind. Why was the plane flying so close to the towers? Wasn’t the pilot aware another plane had hit one already? And then I braced myself.
When the plane slammed into the South Tower and partially exited the other side, a sick feeling came over me. This was no accident. The United States was under attack. Soon afterward, a plane crashed into the Pentagon and another in Pennsylvania. As the events unfolded the rest of the day, the sick feeling in my soul grew. When would the next attack happen? Would we ever feel safe again?
As many Americans did, I clung to my faith. No matter what, God was with us. Bad things happen in this world. Americans shouldn’t buy into the false belief we are exempt.
On 9/11, and in the days and weeks to follow, political party lines were erased. President Bush reassured us from the top of the Twin Towers rubble with a bullhorn in his hand and again, days later, when he bravely walked to the center of a major league baseball field and threw out the first pitch. Congress stood arm-in-arm on the steps of the Capitol and sang God Bless America. We were one people with one voice joined in determination to protect what America stood for—freedom.
But there was another angle to 9/11 for my family. My son Josh turned seven years old that day. We had serendipitously celebrated with a party the Saturday before. Many years passed before he enjoyed another birthday. The naïve belief in our nation’s security that the party-goers appreciated three days before the attacks had been shattered much like Pearl Harbor had done almost sixty years before.
My son’s generation has grown up in the shadow of the war on terror. Some of his earliest memories are of his country going to war—a war brought to our shores as it had been sixty years earlier. I had a difficult time making sense out of the attack, and an even more difficult time explaining it to him.

Born out of this tragedy was renewed patriotism for many Americans, young and old alike. The scenes of firefighters running into towers that eventually collapsed on them had a profound effect on Josh. Their sacrifice instilled in him a sense of duty toward his country and fellow man.
When Josh turned 16, he joined the Hopewell Fire Department teen explorer program. He completed the rigorous Fundamentals of Fire Fighting class this spring and will be eligible to be voted in as a full firefighter on September 11, 2012.
Ten years after this horrible terrorist attack on our nation killed thousands of Americans, I still get chills thinking about it. We’ve managed to capture or kill many of the masterminds involved in the plot. Many servicemen have been killed, injured, or psychologically changed from our war on terror. Americans have changed. We’re all battle weary from the evil perpetrated on us that clear September morning and its aftermath. We learned on 9/11 that the bubble of security we’d foolishly wrapped ourselves in did not exist.
But we also reaffirmed something Americans knew before the attacks. Americans pull together for the good of all. Americans overcome. As we pause to honor the victims of 9/11 today, let us do so with the spirit of hope their lives represented.
********************************************************
Posted by Laura Hodges Poole at 8:38 AM No comments:

Rest for the Weary

“Come to me, all who labor and are heavy laden, and I will give you rest. Take my yoke upon you, and learn from me, for I am gentle and lowly in heart, and you will find rest for your souls.” Matthew 11:28-29


I don’t know about you, but Jesus’ soothing words are the balm I need for my soul many days. When I’m scurrying around, trying to meet deadlines or deal with a family issue, I feel “heavy laden.” Often at the end of the day, I reflect on how stressful the day has been. I welcome the moment when the light is turned off, and I put my head on my pillow. The older I get, though, the less sleep is immediate.
On those nights, I think of Jesus’ words, and I wonder: Why do I allow myself to stray from His gentle rest?
As I’m typing this, friends come to mind who are laden down with overwhelming health issues, financial worries, job losses or underemployment, dysfunctional family situations, and the list goes on and on. My prayer for you this morning is that in the midst of the chaos swirling around you, you’ll find peace for your weary and burdened souls in the gentle rest of our Savior.
Posted by Laura Hodges Poole at 8:19 AM No comments: