How To Create Heroes and Villains

When we think of a hero or villain, stereotypical images may arise in our minds. After all, we’re surrounded by media images of firefighters, soldiers, Superman, Batman, and others who model heroic greatness. Similarly, serial killers, mass murderers, and terrorists round out the picture for villains.

Although the above examples are fitting, many people with heroic and villainous qualities reside around us. Literature is no exception. Successful stories mirror real life. In believable plots, characters possess some of both personas. To explore this, let's dig deeper into the qualities of heroes and villains.
What is a Hero?
Dictionary.com describes a hero as “a man of distinguished courage or ability, admired for his brave deeds and noble qualities,” as well as “the principal male character in a story, play, film, etc.”
In addition to the main character being brave and noble, perhaps he will also be selfless and display his courage in a humble way.
Click here for a detailed list of hero characteristics.
As I alluded to, believable heroes also have flaws. No one is perfect, even in a fictitious world. A hero probably won't possess all ten qualities on the above list. For example, he could be impatient, which could lead to compromise and sidetracks his goals, at least temporarily. Despite a heroic personality, characters must have opportunity to grow from the first page to the last.
What is a Villain?
Dictionary.com describes a villain as “a cruelly malicious person who is involved in or devoted to wickedness or crime; scoundrel,” as well as “a character in a play, novel, or the like, who constitutes an important evil agency in the plot.” 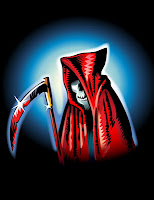 As with heroes, villains are not entirely one character trait. In fact, to keep the reader guessing and perhaps make the plot more intricate, especially in suspense where the villain’s identity may not be revealed, an admirable quality the villain possesses will deepen the plot.
During an interview, Ann Rule, author of “The Stranger Beside Me,” which retells her relationship with serial killer Ted Bundy, illustrates this beautifully. She discussed the difficulty of reconciling the Ted she knew—her co-worker on a suicide crisis hotline, kind, considerate, always available with a shoulder to lean on—with the Ted who brutally murdered women. His good qualities enabled him to fly under the radar of law enforcement and challenged the prosecution during trial.
So whether you’re creating heroes or villains, believability is the most important quality a character can possess.
Now, it’s your turn. Who is your favorite hero or villain in literature and why?
© Laura Hodges Poole
Posted by Laura Hodges Poole at 4:39 PM