Coping With Loss and the Holidays - Part III 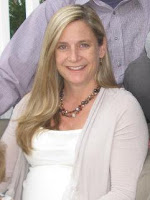 Today, I'm thrilled to have guest blogger Kristin Johnson share the story of her father and son. Welcome Kristin!
With God all things are possible. He will never put anything in front of us we cannot endure. It was August 2008, and my dad was having an outpatient procedure done to remove a tumor in his jaw. My husband Chris, myself, and our three children were heading to North Carolina for one last summer vacation before school started. We decided to stop by the Charlotte Medical Center to check on my dad on the way. Mom had expressed some concerns because dad had to be taken back into the operating room due to some complications and he wasn't waking up.
To make a very long story short, my dad did not make it through this and died on August 2nd, 2008. We were all in shock, but my dad had come to visit me the weekend before he died. He told me he was a little scared but knew God would take care of Him. I felt peace and knew I needed to be strong for my family.
We were just getting through with the shock of my dad's death, when our 3-year-old son Samuel had a tricycle accident at my mom's house. We had been staying with her since my dad died so she wouldn’t be alone. Samuel had trouble walking for about two weeks, which seemed odd since the accident wasn't that bad. He began bruising for no reason and spiking high fevers. We took him to the doctor, and they ran some tests which determined Samuel had Acute Lymphocytic Leukemia. Samuel was diagnosed of September 4th, 2008, only one month after my dad died.
Okay, God, you promised to never put anything in front of us we cannot handle, right?
This felt like more than we could handle. We prayed God would guide the doctors involved with Samuel's care and that he would sustain us through this trial. I prayed to God, begging it could be me and not Samuel. He was so young and had so much life! God did sustain us, and yes, at times it seemed life could never be the same. The challenge was overwhelming, but God helped us see His mercy and kindness through Samuel's walk with cancer.

We were so blessed with excellent doctors, family, and friends who helped us through Samuel's journey. Katelyn and Paul, Samuel's older sister and brother were a huge support for Samuel and continue to be there for their little brother. Also my mom helped me take care of Samuel, which helped her get through the loss of my dad. She was helping us and that made her feel good. God is good all the time:)

Samuel has completed his leukemia treatment and is all better. He gets his port out this Christmas break 2011!
Not all stories like this end as well as ours has, but I know God never left our side through my dad's death or Samuel's cancer, and for that I am eternally grateful. I pray for those who suffer during the holidays and hope they will feel God's power and strength. May God bless each of you.
~Kristin B. Johnson
Posted by Laura Hodges Poole at 8:25 AM