All Dogs Go To Heaven?

“Surely the fate of human beings is like that of the animals; the same fate awaits them both: As one dies, so dies the other. All have the same breath; humans have no advantage over animals. Everything is meaningless. All go to the same place; all come from dust, and to dust all return. Who knows if the human spirit rises upward and if the spirit of the animal goes down into the earth?” Ecclesiastes 3:19-21

Do you remember the 1989 animated movie “All Dogs Go To Heaven” that entertained children worldwide? According to the plot, the dog Charlie is killed, goes to heaven, and then returns to earth to find his killer and help an orphan girl. Another hokey ‘80s movie looking back on it now. J Yet, the question of pets in heaven is a mystery.

Two weeks ago, our dog Dixie died from an aggressive blood vessel cancer she’d been diagnosed with last October. Given only a few days to live, she rebounded and had mostly good days until her sudden downturn. Our prayer had been for a merciful end, and for the most part it was. No lingering or whimpering in pain. And we didn’t have to make a choice to put her down. Even though my heart breaks when I look at the empty places she used to be, I’m thankful for God’s mercy in her death.

A discussion ensued in our family as to whether pets go to heaven. It’s a tough question without a clear-cut biblical answer. At least not one I’ve found to be definitive. But, as Elisabeth Elliot once said—we would be spiritual dwarfs if God told us everything in the Bible! Some answers we have to search for ourselves, spending time in prayer and the Word, allowing the Holy Spirit to give us discernment.

So, the million dollar question is: Is searching for the answer on a pet’s eternity even a worthwhile pursuit? I suppose it is when you’re faced with your pet’s death.

Through the centuries, people have wrestled with whether their pets go to heaven. Apparently, based on the above Bible verse, even King Solomon did. Some people are emphatic that pets don’t have an afterlife and even insist on telling their grieving child that little Spot is dead and buried, never to be seen again. Sorry, but I feel that’s unnecessary. Just my opinion.

From Rick Warren to C.S. Lewis to Billy Graham, all have voiced opinions and interpretations of the legitimacy of an afterlife for pets. The consensus is, even though dogs don’t have a redeemable spirit, they nonetheless have a spirit. Why wouldn’t God allow them in?

People miss heaven because of their rebellion against God's offer of love, by rejecting Jesus. But dogs, which have no ability to sin nor moral conscience, do not have an ability to reject Jesus. It is the same principle as a baby, young child or mentally challenged individual. The Bible calls them "safe," not "saved." In Proverbs we read, "The Lord preserves the simple," which includes persons without the ability, capacity or moral conscience to reject Jesus." Rick Warren (USA Today)

When God created the earth and every living creature on it, He looked at it and declared it good. Obviously, God is an animal lover. You only have to look at the beauty of nature with its thousands, maybe millions, of species of animals to see this is so. Since the original creation included animals, I believe the new earth will also include animals. I don’t necessarily believe every single animal that ever walked our earth will be resurrected. I think the difference will lie in the essence of their spirit and perhaps their earthly purpose. Although in the beginning Adam and Eve were vegetarians and instructed not to kill or eat animals, that changed after man’s fall. However, for sacrifices and food, only very specific animals were allowed.

And after the flood, God felt it worthy to include animals in his covenant:

Although the Bible is clear on animals being part of the new world, the bottom line is—no one can prove conclusively whether eternity will include our pets. It’s barely possible God left this vague because of the grief it would cause to know conclusively. Just like the marriage covenant is for the benefit of humans on earth and won’t transfer into our eternal life, it’s just as possible pets are for our earthly comfort and gratification now but won’t transfer into heaven. As distressing as this may make those of us who are pet owners, I believe when we get to heaven, it won’t be an issue. There are lots, okay, some J married folks who grieve that they’ll no longer be married in heaven. God will wipe this sorrow away. We’ll have different lives, ones we can’t fathom now, but in God’s infinite wisdom, they’ll be incredibly fulfilling for us and glorifying for Him. So the issue of marriage or pets, things of our current earthly life, won’t be important.

“In his hand is the life of every creature and the breath of all mankind.” Job 12:10 (click to tweet)

We have to trust that God loves animals probably more than we do and will treat them fairly. And I’ll go a step further and say as faithful as my pets have been, it’s barely possible that in their pure hearts and motives, untouched by a sin nature, they reciprocate that love better than we humans do.

Then I heard every creature in heaven and on earth and under the earth and on the sea, and all that is in them, saying: “To him who sits on the throne and to the Lamb be praise and honor and glory and power, for ever and ever!” Revelation 5:13

For now, in my grief, I’ll allow myself the comfort of imagining Dixie in heaven, whole and pain-free, and one day I’ll see her again. If you believe differently, that’s fine, too. I’d love for you to share your feelings or thoughts on the topic.

The wolf will live with the lamb,
the leopard will lie down with the goat,
the calf and the lion and the yearling together;
and a little child will lead them.
The cow will feed with the bear,
their young will lie down together,
and the lion will eat straw like the ox.
The infant will play near the cobra’s den,
and the young child will put its hand into the viper’s nest.
They will neither harm nor destroy
on all my holy mountain,
for the earth will be filled with the knowledge of the Lord
as the waters cover the sea. Isaiah 11:6-9
If you’re currently grieving a loss, whether a loved one, friend, or a pet, or have a prayer request on any topic, leave a comment or email me confidential requests. I’ll be glad to join you in prayer. Remember, no issue is too big or too small for our Father. If it matters to you, it matters to Him.
God bless, 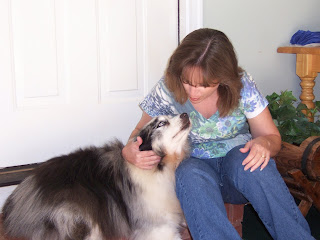 Email ThisBlogThis!Share to TwitterShare to FacebookShare to Pinterest
Labels: All Dogs Go To Heaven, God's faithfulness, grieving a pet, pets in heaven