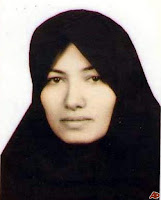 For the past couple of years, I’ve followed the case of Sakineh Ashtiani, an Iranian woman sentenced to death by stoning. Sakineh touched my heart and soul from the first moment I saw her picture and learned her fate. She and I are about the same age. Sometimes at night, I lay awake and think of her. I ask God to comfort her.
My heart breaks, not only for her, but for women suffering abuses worldwide. To God, Sakineh’s life matters just as much as mine. She is every woman.
Many conflicting reports on Sakineh’s case have surfaced from Iran, as well as from groups like Amnesty International. Because of this and the limited nature of a blog, my post will not be exhaustive on her case. Rather, I’ll broadly paint her picture with the most consistence data available.
There’s no disputing that Sakineh is awaiting execution for crimes she was either initially acquitted of or already punished for.  There’s also no disputing the torture Iran employs to gain confessions.
In May 2006, Sakineh pled guilty to an illicit relationship outside of marriage. Under Iranian law, she was given 100 lashes while her children watched. Amnesty International and her attorneys state she was acquitted of murder.
In September 2006, she was tried again for adultery with the added charge of murder. Her husband had been killed by her “lover,” who received a ten-year sentence, but incredibly, was freed by the Iranian government without serving the entire sentence. This time, Sakineh was convicted and sentenced to stoning. Under Iranian law, her children could forgive her sentence, thus commuting her sentence to ten years, which they did.
Through this entire charade of justice, Iran appears bent on executing this woman, regardless of their own legal system. One report gives the reason for the second trial and guilty sentence after acquittal because the judges “felt” she was guilty.
Under Islamic law and culture, women are valued as half a man. It takes half as many witnesses to convict her of a crime and twice as many to declare her innocence. More about this in a moment as it pertains to carrying out the stoning sentence.
When first brought to international attention in 2010, Sakineh's execution was imminent. The only thing that saved her was the outcry from social media after her son bravely wrote a letter to the international community outlining his mother’s plight. People who did not know Sakineh (myself included) began writing letters, emails, and making phone calls to their government to intervene on her behalf. Protests were held worldwide in major cities such as London, Rome, and Washington, D.C. The government of Brazil offered Sakineh asylum. Secretary of State Hillary Clinton asked Iran to respect the fundamental rights of their citizens. The First Lady of France was probably the most outspoken in her comments to win Sakineh’s freedom, to which she was quickly lambasted by the Iranian government as being a prostitute who deserved death herself.
When a London newspaper printed a photo of Sakineh without her traditional veil, she was again given 100 lashes for crimes against Islam.
Despite the fact that several countries still practice execution, the United States included, Iran is only second to China in carrying out executions. They often do so while ignoring their own justice system and execute at will anyone they deem guilty. No consistent legal policies are applied in either country’s system.
Now more about the actual stoning. The criminal is partially buried in sand with the top part of their body protruding from the ground. Women are buried to their chests with only arms, shoulders, and head visible. Men are buried to their waists. Stones of particular size are selected by their executioners. Stones large enough to kill with one blow are discarded. Small stones that inflict little damage are discarded. Thus, it takes several stones pelted against the victim before they lose consciousness and die.
Islamic law pats itself on the back by allowing for the error of innocence. If the person is truly innocent, they will be able to dig themselves out and escape. If they do, their sentence is fulfilled and they are free to go. It doesn’t take a rocket scientist to see who is able to escape and who isn’t.
So what can we do about such barbaric sentences? After all, we sit in the comfort of our Western homes, free, and worrying about whether we’ll be able to work a mani-pedi into our busy schedule this week. Or maybe we have worries of unemployment or foreclosure that sap all of our energies. What can we do about a woman sitting in a dark prison cell in Iran?
In fact, the president of Iran wondered that himself on his last visit to the U.S. When asked by an interviewer about the fate of Ms. Ashtiani, Iranian President Ahmadinejad  questioned why Americans trouble themselves about an insignificant peasant woman in Iran.
Why indeed?
With the enormity of her plight, you might ask, why does it even matter if I care?

Our combined voices are too loud to ignore. Each time Sakineh's execution has been imminent, pressure by the international community on Iran has stopped it.
Let me encourage you to do several things. One, pray specifically that international pressure continues to keep Sakineh from execution—perhaps even secure her freedom. Pray for a regime change in Iran to a less Islamic extremist form of government. Pray that God comforts Sakineh in her darkest moments and, in doing so, she learns about the One True God. Several accounts from former prisoners of concentration camps and the Soviet gulags have testified to the sustaining presence of God during the darkest days of their imprisonment.
Contact Secretary of State Hillary Clinton at http://www.state.gov/secretary/ and the White House at http://www.whitehouse.gov/ to add your voice to those around the world speaking out in Sakineh’s defense.
On December 26, 2011, Iran announced its intention to hang Sakineh instead of stoning. Many in the international community believe Iran is growing closer to executing her.
We must not falter in our attempts to free this woman and many others worldwide facing similar unjust atrocities. As women, we cannot truly be free, if all women aren’t free.
Posted by Laura Hodges Poole at 1:44 PM