God Speaks Even In Silence

When he came near the place where the road goes down the Mount of Olives, the whole crowd of disciples began joyfully to praise God in loud voices for all the miracles they had seen… Some of the Pharisees in the crowd said to Jesus, “Teacher, rebuke your disciples!”
“I tell you,” he replied, “if they keep quiet, the stones will cry out.” Luke 19:37-40

Jesus triumphant entry into Jerusalem before the Passover brought cheers from the crowd. Their response infuriated the Pharisees. Given all the evidence of Jesus being the Messiah, it’s hard to fathom that religious leaders would rebuke him. Yet, there it was. And the Pharisees carried their hatred all the way to Golgotha.

Jesus’ reply to the Pharisees sends chills up my spine. Imagine stones crying out about our Savior. This shows the supernatural power of the Holy Spirit. He can’t not speak about Christ! And if He can’t do it through a person, He’ll find another way.

I became even more aware of that within the last month as we celebrated the life of one of the most impactful pastors that our country, and possibly the world, has ever seen. Reverend Billy Graham passed away in February at the age of 99. I respected and loved Billy Graham. I grew up watching his crusades in the 1970s, and they had a huge impact on me.
As many other folks did after Graham’s death, I watched videos of his life, including one about his crusades to London, England. In 1954, at his first big international crusade, over 2 million people attended with 40,000 professions of faith. He returned in 1955 and again in 1966. 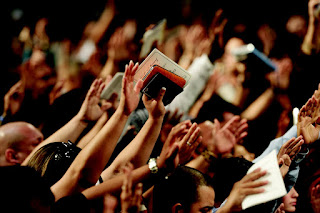 As stadiums packed out for the crusades, the British media began writing scathing reviews of his ministry. They claimed Billy Graham whipped his audiences into an emotional frenzy with the playing of Just As I Am for the altar call. They credited that with the mass number of conversions—not a genuine call of Christ.

So in 1966, when Billy Graham returned to England and held services at Earl Gray’s Court and Wembly Stadium, he ended the services differently. Cliff Barrows, Graham’s music director, recounted the story here:

That first night at Earl’s Court, Billy preached his heart out. There was a real sense of the presence of God. When he finished he said, “We are not going to have any music tonight. There’ll be no singing. But if the Spirit of God is speaking to your heart, then right where you are, just stand in your place, and make your way out to the aisle. Come down to the center through the side aisles and stand here in front of the platform.” He stood back and said, “Now, you come.”

For about fifteen seconds nobody moved. And that’s a long time. Then all of a sudden a seat squeaked, and then another, and another. Then hundreds of people began to stand. They walked to the aisle, shuffled down the long wooden floor that had been put down to cover the turf, and stood at the front.


We went thirty nights without a single note of the hymn, “Just as I Am,” which has been the signature tune of our Crusades through the years. We had never done that before.

When the reporters began to write about the invitation at Earl’s Court, they said that all they heard was a shuffling of feet on the floor. “Bring back ‘Just as I Am!’ The silence is killing us!” they wrote.
I’m pretty sure the reporters didn’t realize what an amazing testimony they were giving—not for Graham but for Christ.
“The silence is killing us”—or as Jesus put it, “Even the stones will cry out.” Even in the silence, the Holy Spirit was speaking. The Pharisees couldn’t silence the Holy Spirit, and the reporters couldn’t either.

Hearing this story of Graham’s crusade confirmed for me that—even in what we perceive as our weak, human attempts to share the gospel—the Holy Spirit shines through our words, and often in our silence.

St. Francis of Assisi once said, “Preach the Gospel at all times. When necessary, use words.”

I’ll take it even one step further. Our testimony is more than what we tell people about our salvation experience. It’s also lived out in our actions. That’s when God’s spirit is most evident.

And then when we do speak, people will listen.

Have you ever felt inadequate when telling people about Christ? Perhaps you have a Bible verse that’s encouraged you when you felt weak. I’d love for you to share in the comments below.

If you need prayer today, please feel free to leave a comment or email me confidential requests. I’d love to pray for you!

Photos courtesy of Pixabay.com.
Posted by Laura Hodges Poole at 8:36 AM

Email ThisBlogThis!Share to TwitterShare to FacebookShare to Pinterest
Labels: Billy Graham, Easter, God Speaks Even In Silence, Gospel, Just As I Am, Laura Hodges Poole, resurrection