Depression and Suicide: Reflecting Over My Sister’s Death

That warm, sunny day in February 2005, when I learned my older sister Michelle had ended her life, was agonizingly contradictory. Her death placed a punctuation mark at the end of a long battle with major depression. Yet, as I took a walk outdoors to clear my head and try to make sense of the news, birds tweeted and daffodils were already in full bloom, raising their little yellow heads to the sun as if to say, “Oh, what a beautiful day.”

And that’s the quandary in which many people suffering from mental illness find themselves. They’re often surrounded by happy people saying, “Cheer up, snap out of it. Find something useful to do, and you’ll feel better.”

Don’t get me wrong. Good physical and spiritual habits, as well as having purpose in one’s life, are all part of mental wellness. But severe depression can be debilitating and challenging to treat, despite the best efforts of those suffering or their loved ones.

When I was sixteen and Michelle was eighteen, sometimes we’d go to the University of Florida track and run. Michelle loved to run. Me, not so much. I had a tentative grasp on Michelle’s changing moods that were progressively growing darker. She tried. Oh, she tried. After all, we were out running, something she enjoyed.

One afternoon when we finished, we went into the restrooms. I heard her lean against the wall in the adjoining stall and begin to cry. I asked what was wrong. Most of what she said I already knew. In my naivete and helplessness, I said, “We’ll figure it out. I’ll help you.” Of course, what was I going to do? I was a kid myself.  I had no way of knowing this was only the beginning of a long journey—one I’d learn more about than I ever cared to know.

I’ve written many times about mental illness. My family experiences have mirrored others I’ve met at local and state National Alliance on Mental Illness (NAMI) functions. I get emails from people walking this difficult path. I’ve read numerous scientific studies and first-person accounts. Yet, I don’t have the answers to explain the mystery of major depression—why some people overcome while others succumb.

Of a side note, one thing that alarms me after a suicide are folks who speak with great authority on the subject, yet their opinions often prove they have little actual experience with or knowledge of mental illness…which is why I continue to write.

For twenty years, Michelle suffered with major depressive disorder and schizophrenia, the former being the most intractable to treatment. Her heart broke for others battling major depression.  She once said, “I wouldn’t wish this on my worst enemy.”

We had many conversations about the state of mental health care. At times, she shared my excitement for the latest news and scientific studies in medical journals. She’d say, “Laura, don’t ever quit looking for an answer.”

But then, once, in a dark moment, she wrote: "There are so many people who love me and they just do not know what to do. Nothing is the answer. I have to do this on my own."

Years later, in her final note, she said, “I just can’t cope anymore. Forgive me, please.”

It’s in those dark, impenetrable moments that one takes their life. For those of us on the outside or left behind, we cope in differing ways. Some grasp for immediate or obvious answers: the person was selfish, only thinking of themselves; if only they’d gotten right with God, He would’ve fixed it.

(I wrote about the selfish angle on my blog a few years ago after country singer Mindy McCready’s suicide. Click here to read.)

I certainly know the validity of spiritual wholeness with God in order to maintain one’s sanity because I’ve experienced that myself, many times, especially since the death of my daughter six months ago.

But suicide goes much deeper than either of these quick explanations. It’s a riddle those of us left in the aftermath struggle to unlock. The conclusion I’ve reached in the twelve years since Michelle’s death is there are no easy answers. Ultimately, suicide reflects deep hopelessness in a person at the moment they make that decision. The only thing we can do is keep advocating for better mental health services and reach out to those suffering with a willingness to listen, encourage, and point people toward effective resources.

Behind every suicide is a real person with a real family who never gets over it. The fact there's still a stigma associated with treating depression medically or with counseling is a form of insanity itself. I can’t believe in the 21st century we’re still having this discussion, but we are. 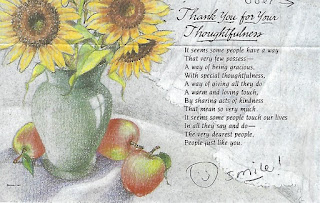 Today, I also choose to think of the good memories because Michelle’s life wasn’t all dark. She had a happy, mischievous side. She loved to play practical jokes, like the time she put red pepper on my pizza when I had my back turned. Her risk-taking behavior often pushed me out of my comfort zone as a teen. As adults, I’d occasionally be surprised with a letter from her. The stationery was usually dotted with her familiar “smile” notations accompanied with a smiley face. Though she often didn’t feel like smiling, she wanted others to smile.

I treasure the quiet conversations we shared. These became rarer as physical distance of living almost 500 miles apart separated us later in life, and her schizophrenia interfered with her rational thoughts. But in those quiet moments, Michelle spoke from her heart. During her stretches of wellness, she modeled what I feel Christian behavior should be in its truest form—caring for others more than herself and uplifting others to make them feel better about their life situations.

If Michelle was ever angry toward God for how her life played out, she didn’t voice it in our conversations. Instead, she embraced the promise of a better life one day in eternity. She understood what so few grasp—life on earth is temporary. Her temporary life was a minefield. I pray she found the peace in eternity that seemed to elude her here on earth.

Are you struggling with depression, the suicide of a loved one, or maybe just a situation that's overwhelming you? I’d love to hear your story and pray for you. Please leave a comment or email me confidential comments or prayer requests. Also, check out the mental illness tab at the top for a list of resources that might help you or your loved one.

Posted by Laura Hodges Poole at 9:37 AM